I am a single female of 50. I lived in my dodge grand caravan all last summer. I went back to an apartment rental for the winter. I am actually doing a little organizing and build in my DGC. Slowly but surely. Since I lived full time in it last summer, I have a pretty good idea of what I need

I wish to move into it for the long run! but I have to get around the winter time thing… Maybe I should save for a more bigger rig but for now, this is what I have …

Winters don’t have to be hard, difficult, or expensive. My DIY heaters/cookers are dirt cheap (Under $10), small, portable, don’t require power, or vehicle modifications, and are simple & easy to make from dollar store materials. I can offer simple directions if desired.

This lifestyle can be cheap, simple, easy, & reliable if we make the right choices, regardless of the weather or the seasons. It’s all about the choices we make. While I may live on wheels, I live in luxury by many people’s standards, having literally everything I want or need to be cozy & comfortable. I couldn’t live any more comfortably in a house or apartment regardless of the cost.

Hi
yes, I would certainly be interested in DIY tricks! I tried candles with clay pot and also I tried with propane heater diffuser and a Mr Buddy heater. I didn’t make much of a difference in the -15 Celsisus nights… I’m really opened to any suggestions considering I have very very liimited space in my grand caravan and no insulation

Hi Val_V,
I really love what you made with your cube! very inspiring

Thank-you so much! I also used candles the first winter but if course open flame is not the safest method and after awhile coats everything in soot. I also tried a Mr buddy heater the 2nd winter! As you probably know it exhausts so much water vapour and no thermostat so have to on/off manually which gets old at night Lol.
I really love using my electric blanket in the in-between weather of spring and fall. It plugs into the vehicle 12v system (round plug).
I have a used RV propane furnace now which has held up very well to temperatures as low as -35°C.
This and many parts are available at RV/motorhome salvage yards. In my area I recommend Haps. He can do the installations as well. He is very fairly priced and has done great work for me.
Hap’s Place RV Repairs & Restorations
(705) 327-7992 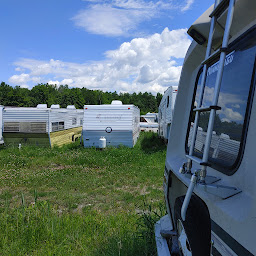 See The Build and Tips and Tricks forums for wonderful resourses. Also Blogs of the Stories of others

Just curious what winter temperatures you are handling with those solutions?

When I was doing frequent cold winters, down to -60°F, I was using a 23k BTU kerosene heater. While it was adjustable between high & low, it didn’t have a thermostat, so it was either on or off. Even on it’s lowest setting, it was frequently too much heat. Instead of the on/off cycling, I regulated my indoor temperature by how many windows I had open. I had a high top window van with no added insulation, no divider between the cab & cabin, and no window covers. Since we need ventilation anyway, even with vented heaters, it was no big deal having a few extra windows open to keep from cooking to death.

My original car/tent heater was a 1910 Western Auto car/tent heater/cooker. It was a 36 wick kerosene/diesel heater. It worked great, but became extremely rusty by the time I was in my 20’s, it was over 50 years old, so I retired it and switched to an Origo marine heater/cooker. While it was supposed to run on alcohol, I discovered that it could also run on kerosene or diesel, which was much cheaper & more readily available.

In the 70’s I switched to a legitimate kersosene heater and 2 burner kerosene stove. Both would also run diesel if kerosene wasn’t handy and neither required any power, only fuel. Simple designs are far more reliable than more complicated ones.

In the early 80’s in Alaska, my friend’s propane furnace died, and propane was also difficult & expensive to find. So I re-engineered that 1910 Western Auto heater/cooker for him. Using an empty 1 gallon paint can, a piece of craft foam, aluminum foil, and a string mop. The craft foam floats, and wrapped in foil, it protects it from the flames. We poked holes through the foil/foam to hold the wicks made from the string mop. We put as many wicks as possible in it spaced 1" apart, and 1" in from the sides. We filled it half full with diesel, and lit some of the wicks. Instant heat. We later found a ~6" cast iron trivet for the top. When not in use, the paint can lid kept it nicely sealed.

Back in North Dakota, I used the same design to help more friends, except I switched to using 8" square cookie tins, which made them lower, more stable, and nearly tip over proof. These would hold 36 wicks, iin a 6x6 pattern, spaced 1" apart, and a 8" square cake cooling rack fit perfectly on top. These were almost identical in size & function to my original heater/cooker, but easier to build.

Later, when cooking at a rally, I needed more than just my 2 burner stove, so I built some for myself, and wound up with 6 or 8 burners to cook on. That was when I discovered that they also worked perfectly to fuel a folding Coleman oven.

Sometime later I found myself out of kerosene, and there was no kerosene or diesel available nearby. What the only little nearby store had was cooking oil. Well… Worth a try to save me a ~100 mile drive, and it WORKED! Not only did it work, it lasted much longer than either diesel or kerosene.

At some point, I just stored my kerosene heater & stove under my bed, and switched to using just the vegetable oil heaters/cookers. They were both efficient & convenient. I later added a heat powered woodstove fan to have non-electric fan forced heat.

Now with the internet, I see some people doing similar with paint cans, or meat loaf pans, using tea light candles. Or those flower pot heaters. Enough candles would probably work, I doubt that I have ever lit more than 10 wicks at a time, but for me the liquid candles are much easier than regular candles, and a gallon of vegetable oil will last me nearly a month during a cold winter.

These heaters/cookers are cheap, simple, stable, require no power, and are nearly idiot proof. I don’t like my essentials to require power to work. These are a modification of a very successful 100+ year old design, that I just modified the wick holder design to make it simpler to build & refill.

While they don’t have a thermostat, they are totally adjustable for heat output according to how many wicks you light. I typically use only 8-10 wicks lit for ample heating. 4 wicks lit turns my cast iron dutch oven into a great crock pot to make pot roast, stews, etc. A few more lit for regular cooking/frying.

In olden times, candle power was very popular for heating, cooking, & lighting, and liquid candles go back thousands of years, and are still widely used in many countries & in off grid and emergency applications. With safe handling & a carbon monoxide detector, they are still a very viable choice.

Wow that is some creativity! Was the MacGyver show based on you? ;D

My concerns for open flames inside is safety of course but also soot & fumes being unhealthy for lungs. Have you experienced any side affects from all those years doing it?

None at all, and I’m 76 years old and been using them since birth.

Other than that, totally clean burning.

I’m more of a dreamer than inventor, and that general design was invented long before I was. I just modernized the wick holder…

Be a snow bird, fly south for the winter.

ah ah! yeah, when I retire… in 15 years… unless I get another way to sustain myself financiarly …

My concerns for open flames inside is safety of course but also soot & fumes being unhealthy for lungs. Have you experienced any side affects from all those years doing it?

I feel like they are safer than a buddy type heater because they are more tip over proof.

How do you provider then will energy to create heat? Electric, fuel or fire?

I would be interested in learning how they work.

I feel like they are safer than a buddy type heater because they are more tip over proof.

Yeah 13 for me girl! But I prefer to stay inside Canadian boarders ;D

While that may be true, their notoriously tippy, and known for setting things on fire if tipped forward.

Just wow! It’s amazing what can be done without all the modern gadgets. If the grid every goes, you have it already under control. We should go more back to the old ways anyway, in my opinion. Thank you for sharing!

Growing up off the grid in the swamps without electricity, you get quite the education. While there were no solar panels, we used the power of kerosene, the sun, the rain, the wind, fire, & water to live reasonably comfortable lives.

Our grocery store was the swamp, the woods, and our garden. Lots of fish, seafood, & wildlife combined with wild fruit, berries, & veggies.