Backstory: We purchased the van in April of 2021 and drove it a lot for two months with 0 issues

We made a cross country trip from AZ to GA to see family. When we got to TX there was a heavy downpour and tough storms. We started seeing issues here and all sorts of error codes popped up. 20-25 codes came up on scanner and our dashboard was lit up. Van went into limp mode on several occasions (very dangerous!) and intermittently would not start. We limped back to GA eventually and dried the van out and it worked for a week. Checked it at a Dodge dealership and they could not find any issues. We proceeded with our journey with small issues here in there with electrical which we originally thought was water related (and still could be)

We made it into South Dakota with 0 issues and started our adventure. We had one issue where it didn’t start and went into limp mode, again, after it had rained. We brought it to another dealership and they could not figure it out. We brought it to an independent mechanic who jiggled around some wires and eventually had it good enough to run where we felt safe then cleared our codes. We drove for a couple weeks no problem.

Got into Wyoming and did not have any issues. Spent a couple weeks in a few towns but had a severe issue outside of Sheridan WY and had to make an emergency pull over and we tried to troubleshoot it ourselves. I reconnected wires, reset battery, dried out different components and it worked! We kept on our drive to visit areas in WY then made our way to our destinations in Montana next. No issues for a week or so in Montana. Drove through Billings-Bozeman-Butte-Missoula no problems. In Missoula we had a delay, again after it had rained, and after i did the same old trusty steps of jiggling some wires and letting it rest we drove right on ahead.

We were heading to Kalispell when disaster struck us in a small town of Polson MT. Worst trouble yet and most errors. Stalled out at a red light and barely limped out of traffic into an autozone. Stranded for two days after working on it tiredly ourselves, we called a tow to get it to a local mechanic. Mechanic took a week and didn’t find any thing wrong with connectors, battery or wiring. Van was fine for about 4 days then disaster all over again. Had so few places to stay we were stranded again. We had to call another tow and reluctantly got it towed back to Missoula at their Dodge dealership there. This has been a month now since being stranded and had a very difficult time finding places to stay without going broke. We are flying out of here tomorrow to stay with some family to just reset everything.

Dealership has had it over a week now and they aren’t 100% sure of the issue. They replaced the ECM because they thought that was the issue, check every wiring harness and connector point and found no issues. We are running out of ideas and are very worried we will have to list it as a total loss.

Sorry for the long story but we are in a desperate situation since our whole life is in the van and we are with our dog. No many resources left or choices. If anyone has any advice it would be extremely helpful!

Really sorry to hear about your troubles. I assume that the van is no longer under warranty. Seems to me that bad design, or something else that was changed in the van, is allowing the electronics to get wet. Once the electronics are wet, corrosion may have set in (either in the connectors or internally), totally screwing it up.

I think the solution may be to check all the electrical components and connectors to see if there’s a corrosion and/or wetness problem, and get to the bottom of why things are getting wet in the first place. No modern vehicle should have trouble in wet weather. That’s my analysis from afar.

"I start saving money with the vehicle purchase,
and pay practically nothing to convert it." ~ Road Warrior

That’s a large bummer, we haven’t had this issue. Most engine compartments are going to get wet, regardless of make or manufacturer and are designed to handle some water. It’s not like they’re sealed off from the bottom either. Curious as to what year your Promaster is?

We personally haven’t had this issue driving in heavy rain, nor known anyone with it. Looking at the promaster forum it looks like some people believe this also caused this or other issues and are resealing the area around the cowl and the hood with some extra material.

Maybe it would be worth a shot as they seem to think it’s a $25 fix.

We originally thought it was connectors and the pins since we had most of our trouble in rain. However I couldn’t find anything, other mechanics didn’t see any corrosion, tears or any other problem.

The dealership went through the whole electric schematics and check every connection and no issues, no bent pins, no corrosion… nothing. It’s messed up now more so in the dry weather so we are just totally unsure if it was rain after all.

We tried sealing the window cowl but it messed up anyway. We will reseal once we can.

We have sealed the window cowling but still had issues so makes me think it is something more than water now.

@THRU - I would do a few things if you have not 100% for sure. Check you vin for recalls. It looks like there was a recall for 2014 promasters for electrical and water issues (https://www.nhtsa.gov/vehicle/2014/RAM/PROMASTER#recalls). Either way you’ll want all this done to you vehicle if it has not been. It should not Cost anything.

You should get your ignition coils, plugs, wires, any other standard part of and all your filters changed. If you haven’t done that it is probably worth it as it could be done yourself and won’t cost a ton of $$$. It does sound a bit like a coil could be bad or going bad.

Figure out where all the grounds are on the vehicle and clean and tighten them yourself. You should be a able to find a numbered list with some googling if it isn’t in the manual. But a loose or corroded ground could cause also cause the symptoms you are seeing.

Sorry to hear of your trouble. Reading your post all I could think was that you were indeed patient and committed to soldiering on.
Is this a brand new vehicle?
If yes, you may be entitled to utilize an applicable lemon law in your state of purchase.
It is a process involving proving your troubles and expenses with a new vehicle.
While your issue is likely fixable, some vehicles are lemons hence lemon laws.
I hope you fix it and rack up many miles and adventures but at least researching cutting your losses may be prudent.
Good luck,
Jeff

Some states have lemon laws for used vehicles too, but returning it may not be realistic if you’ve already put a lot of time and money into a conversion.

Hey wanted to give an update on this. We had to take a break from a lot in life to reconsider our position.

We finally made it back on the road once the dealership replaced all the harnessing and wiring schematic behind, and under, the driver’s side headlight. Cost around 2 grand for labor and equipment. We flew back excited to be back and were having a great time for three weeks until the battery light came on. Thinking “oh this has happened and we will need to recharge or get a new battery… no big deal.” WRONG

The alternator needs replacing, we had it checked by three different mechanics just to make certain. Took it to an alternator specialist in Idaho and he said it probably was messed up due to the wiring and electrical issues we had when the BCM was burned out a month prior. A little relieved because at least we have a diagnosis. Bad news, there aren’t any 2014 Dodge Ram Promaster 2500 3.0 diesel 4Cyl 220amp alternators in the country. All special ordered (called dozens of dealerships, auto parts stores and even scavenger yards) would cost over 1300+ and take 30-45 days was our estimate.

We had to get back on the road and are about to drive this van off a cliff somewhere!
Went ahead and ordered a 180amp alternator that fits our model because it was the only one we can find. Sucks because we are losing 40amps but we have to protect our battery and way of life.

If anyone has a 220 amp for this make and model we are buying!
BIG lesson learned: do not buy a 2014 dodge ram promaster or any other vehicle that switched over ownership from a different country. Foreign parts are super rare and expensive to come by.

I have a diesel promaster too with a soon-to-expire warranty. I know all about the ridiculous prices and ridiculous wait times.

Here’s a used alternator with a much nicer price. Do make sure it’s the 220amp as the website seems to not list the diesel and diesel specific parts.

It didn’t let me post the link because I’m a new user, but search lkq online for a used promaster 220 amp alternator.

Thanks for looking but for our particular model (3.0 diesel 4cyl) there are not parts available.

Do these not come standard with the 180amp and the 220amp was an upgrade option? I’m not sure you’re getting any benefit by having the 220amp. Perhaps if you have a roof AC or something of that sort?

No AC or heat. I believe it came standard with a 220amp but that alternator is burned out now.

Unfortunately we are downgrading which makes me really nervous. It will be temporary until we can get our hands on a 220 again. I checked over at the Promaster forums for any expert insight there and common consensus was that we just need to be careful and not overload the 180 amp with our power. The biggest sucker is our inverter when we have to switch it on for outlet power and our 12v fridge. Everything else is really smart (1-3 amps maybe)

Are you using your inverter only while the engine is on then? What do you do while you’re stationary to run the inverter? I’m not sure of your electrical setup, but I personally think you’ll be fine with the 180. I think ours came standard with 190 though its gasoline and not diesel so I’m not sure of the difference there.

Yea Diesel requires a little more juice. I just switch on the inverter and it pulls from our house battery (2x200amp/hr).

We MOSTLY use the inverter only when stationary. Rarely when we are driving. We probably will try to stay clear of that until we can get a 220amp.

I agree with both LKQ & car-part(s?).com

Then either get the original rebuilt, or rebuild it yourself & you’ll have a spare. A good shop should be able to rebuild yours in a day…

"There are those who learn, and those who wish they had learned." ~ Good2Know

I looked at both of those sites. Could not find anything

Took it to two different alt shops, both of them said they could do it - but they cannot find the proper parts to put back into it.

not sure on this one. Can’t see the amperage but the part number looks correct. 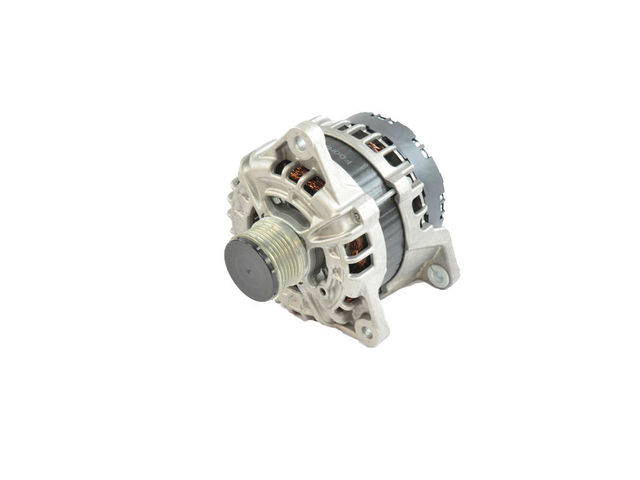