Parking/staying in van in a national park tent site

I am looking to buy a RoadTrek 190 or similar under 20 feet. I see that it is much easier to actually find an available spot in a national park if I only need a tent site with no water, electric or sewer. Can anyone offer any information as to if I will likely be able to park in a tent site? I’m thinking of getting something under 20’ for this exact purpose.

I’ve never been denied use of a tent site while in a van in the past - but I always put up a “tent” of sorts over the picnic table or small tent somewhere on the site so I probably fly under the radar if there is a “tenting only” restriction. Most of the “RV length restrictions” are based upon RV length (typically trailer not tow vehicle length), or overall Class A or C length or combined trailer length PLUS tow vehicle. The only one that comes up in a “19 foot” search is Lava Point Campground in Zion Nat Park, and that is a really remote backcountry site. There are some restrictions on certain roads in NPs, but most of those are vehicles “over 22 feet are not advised/not recommended” - but not banned (with a few exceptions). For reference, the only vans over 22 feet are the Transit 148 WB extended at 22’ 2" , and the Sprinter 170 WB at 22’ 10", and the extended model at 24’ 1". I doubt most narrow body vans are going to get much attention from Park Rangers though. They are more looking at vehicles like trailers and class As and Cs that run into problems fitting in campsites and negotiating turns on narrow roads.

For the most part, with a van, you aren’t going to run into any vehicle size issues. It’s not worth sacrificing the length that might be needed in a build (to make the van what you NEED) in order to fit into perhaps a half dozen restricted sites in the whole country.

Thanks so much for your detailed reply. Much appreciated! I have not wanted to get involved in a build but then discovered the Road Treks. The older ones I’m looking at are on a Dodge chassis. From something I read somewhere in some national park website, I had it stuck in my head that I would have to be under 20’ to get one of the more available “cheap” sites. That was making me rule out the Road Trek 200 Popular which is 20’ 6”. Here’s a pic of what they look like…. I wonder two things… in your opinion, do you think these are too “obvious looking” to get on a tent site (love your idea of pitching a tent on the site), and have you ever heard anything about needing to be under 20’? 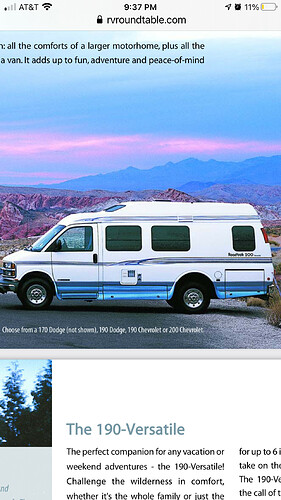 Obviously a camper is actually much more stealthy than cargo vans.

I’ve ran into a few sites that actually require a tent in a tent site, but they are rare. For most, it is more of a reference to what amenities the site offers than any requirements.

Most that tend to require a tent, the campsite is far from the parking area, but I’ve camped in my vehicle in those too, and never been hassled.

“Everything should be made as simple as possible." ~ Einstein

You could explore drive away awning tents as an option? 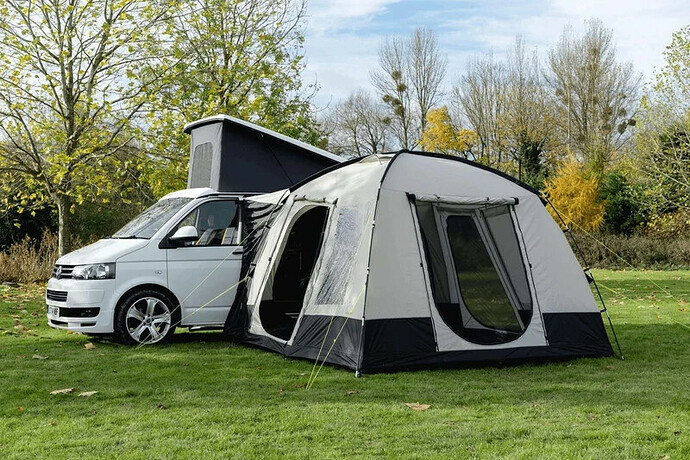 It would attach to the side of your van (magnets or awning rail) but still be a free standing so you can leave it on site and drive away. I would guess that would fill the requirement for a tent and still be usable from the van life perspective during long stays in same place.

Another option could be a $20 pop-up tent: throw it on the ground, put couple rocks in so it stays put and sleep in the van

I don’t think those 6 inches will matter. They don’t carry tape measures with them. The road treks are great. I would have bought one had a good deal been available when we were buying. Pretty much any van is obvious at this point. People aren’t that stupid. They know what you’re doing.

For what it’s worth, most national parks typically have free BLM/NF camping right outside the entrances within a few miles. At least out west. You don’t really get much extra staying at the parks themselves other than being packed in tight beside people.

Actually, your BLM suggestion brings up another thought. I am a female traveling alone and I keep picturing a BLM as this super dark, desolate, scary, miles away from civilization place that will freak me out. The most likely BLM’s I’d probably stay at would be near the overbooked national parks such as Zion, Bryce, etc. I feel much better with people around me. Can you paint the picture for me as to what these BLM’s truly are like? Thanks!!

Regarding tent sites: I’ve tent camped in “tent only” places where you park your vehicle in one spot and then have to carry your tent and stuff a short distance down a path to the campsite itself where you set up. One such place I remember was in the White Mountain National Forest in New Hampshire in summer. There were about 10 occupied campsites. It was a clear night and a cold front blew in. The temperature dropped to about 25°F. By about 2 am half the “tent” campers were up in the parking area sleeping in their vehicles with their engines running for heat. The caretaker and ranger didn’t consider it a problem.

In the real world, many campground rules and restrictions are selectively enforced. If you aren’t causing a problem, you won’t draw the attention of caretakers, rangers, etc. One big one I see is “No Alcoholic Beverages” at many parks (especially state/local parks). If you’re not obnoxious about it, meaning up late, loud, and with a oversized bonfire, nobody knows or cares if you have a soda vs. a beer in your insulated mug. I’m not advocating breaking rules/laws, just saying that if you don’t draw attention to yourself, you typically have nothing to worry about.

Thank you. I wondered what I would do if I found myself in that particular situation. I really have no desire to sleep alone in my tent as a 60+ female. I’m weird like that lol! I’ll bungee jump off buildings, skydive, and travel to third world countries by myself, but I’m scared to sleep alone in a tent!!!

Welcome to PVL! I was thinking of BLM land as a great place for me to boondock sometimes when I go nomad next year. Unfortunately, a seasoned nomad alerted me to the danger of even a man boondocking alone on BLM. Individuals, pairs and gangs watch those secluded areas to take advantage of and harm boondockers. They sometimes may use drones to identify where lone boondockers are parked. He’s been through some shocking experiences. He also said how a ranger told him that he would never stay on BLM without being in a group. So, I’ll only be staying there whenever I get together a caravan or join one. I’ll only do this occasionally because I know I’ll prefer to travel and park alone.