Hi, Guys been working on my layout now for a while doing revisions, 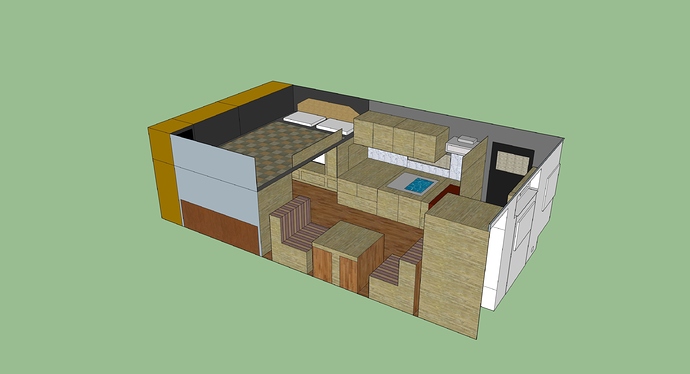 One tip I picked up from various youtube channels is to use cardboard cutouts to see just how it might look.

We took all the measurements and measured out on the floor the width and the length then used cardboard cutouts where all the cabinetry would go. This really helped us get a sense of the actual space that we are using.

We used our kitchen as a mockup to size up the galley and some cupboards etc . .

Then I went into SketchUp and had to learn how to use that which surprisingly enough wasn’t too bad a few passes and lots of cursing I finally figured it out enough for what I needed.

It really helps to be able to see the actual layout and as I constructed it I made a few much-needed changes along the way. Mainly in the “lounge”, I made the best use of space in the TV unit as this space is really “dead space” so I constructed a bigger unit with drawers on either side

I now have tons of storage we completely redesigned the garage/bed area we now have a “lounge” and this will help us to really feel like we have a tiny house rather than a campervan that is just practical.

We have a galley, a “dinette” wardrobe, lounge, tons of storage drawers and units, a double bedroom and a garage for our mountain bikes and other stuff.

Of course, we will probably alter some of the specs as we build it but for now, we have a “snapshot” that gives us something to visualize. Setting out the dimensions in realtime in cardboard on the kitchen floor helped a lot.

Some sacrifices were made but I suppose its all about compromise. Originally we were having a garage beneath the bedroom but that did take up a lot of space so we came up with the lounge idea and we have about 5ft headroom to play with as we will be sitting down mostly we thought that would be ok.
The bedroom now has just enough room to sleep and turn over depending on the mattress we choose but we feel that’s a compromise worth making as we only need to use the bed for sleeping 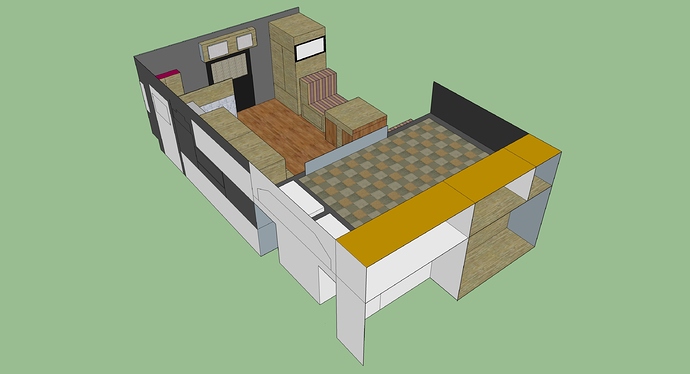 here is another image from the other side 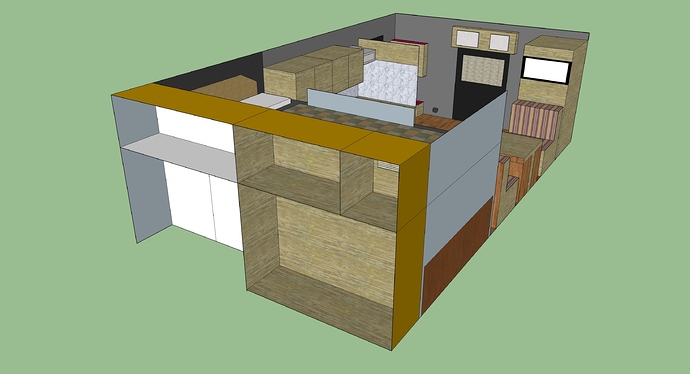 "It’s nice to be important but it’s more important to be nice." ~ Nature Lover