Hey everyone, I’m new to the site and hoping some people can enlighten me. I have two 100w solar panels (Renogy) wired in series, 20amp MPPT charge controller (Renogy), 100ah Lithium Iron Phosphate battery (Renogy), 300 watt pure sine inverter, and a fuse block for my led lights and 12 volt plug.

I have my charge controller battery load terminal positive wire running into a kill switch, then to a 20amp inline (Renogy) fuse ending on the + battery terminal. I have the negative running to the battery - post. I have a positive wire running from my battery, kill switch, 50amp fuse and into the 300w inverter. Black wire from battery to inverter. Inverter grounded to van chassis (paint scraped to expose bare metal). The battery is grounded to the van chassis as well, separate location. I have my fuse block positive and negative wire running into the charge controller load terminals.

I rechecked my wires coming from the panels = all good.

I rechecked my wiring on the components = all good.

I’m looking for any suggestions or tips on a remedy before I have to mail this charge controller back. Thanks in advance everyone.

I’m not an expert but it looks like you have a negative running from your battery to the positive on your fuse block. The top of that bluesea fuse block is negative and the bottom is positive. I see a negative running directly from the batter to the wrong spot on the fuse block. I do not see anything running from the positive of the battery to the fuse bock at all. To me that seems dangerous and wrong unless you wired it backwards on purpose. But I would think there would only be one wire running to the bottom of that block from the positive of the battery and one running from the top to the negative of the battery. The only other thing I would have hooked to it would be the 12v circuits. I would remove the solar section and make sure all of that works correctly. Then add the inverter in. Then after all that works add the solar back. It might help to isolate the problem.

I bypassed the fuse that blew (for this test) and the charge controller and inverter both have power and are functioning properly. reads 13.0 I think. 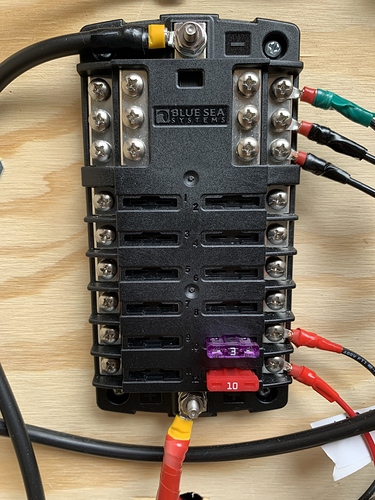 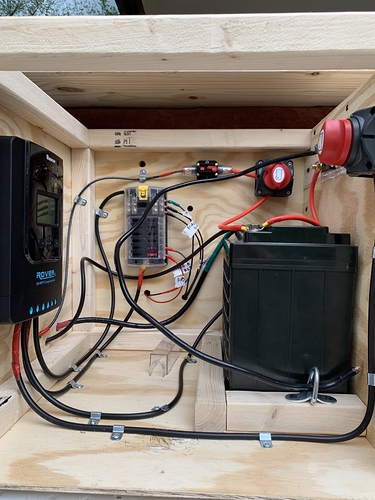 image. Ignore the thick wire in the upper right hand corner coming off the 20 amp inline fuse near the kill switch, it ends near the d ring by the battery. I was using that for the test. 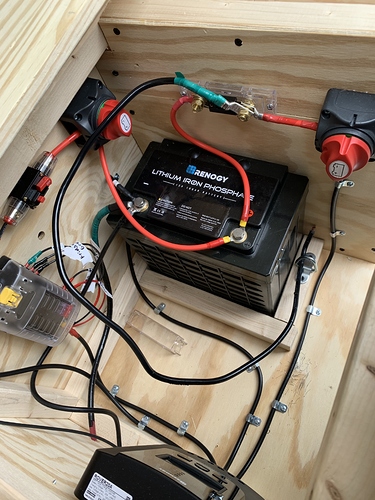 I suppose my thought is here, redundant or not if you remove the controller from the system altogether and you still blow the breaker/fuse then you know it is not the controller and something is wrong somewhere else. Like I said, start as simple as possible. Battery and 12v circuits, that is it. If that works then add the inverter. If that works then add the solar back. You have to start isolating items to determine where the short is coming from.

Makes sense. I’ll give that a try and get back to you. Thanks.