Just joined the forum and have a question:

I’m starting to convert my 2000 E350 from a 15 passenger van to a camping, hauling, and travel van. It has the long body. I left one bench seat installed (the one behind the driver), but removed the rest.

All the seats except the one in the very back were mounted to four (4) heavy-duty brackets held down with large Torx fasteners - I removed the brackets. The one in the very back is different. The very back seat is held in place by two very heavy duty long brackets instead of four. What’s the reason for the two long brackets vs. the four short brackets that the rest of the seats are mounted to? Is it a structural member of the van that shouldn’t be removed? It appears to cross the dividing line between where the short body would end and the extra length of the long body. Can it be safely removed?

I would leave them just to be extra safe, and besides, they make great attachment points for things.

Thanks for the welcome.

Well, they stick up about 1-1/2 inches, interfere with putting in a floor, and make sleeping with a mattress thrown in the back a rather lumpy proposition.

Mine’s a Dodge, and all my seat brackets are flush to the floor… 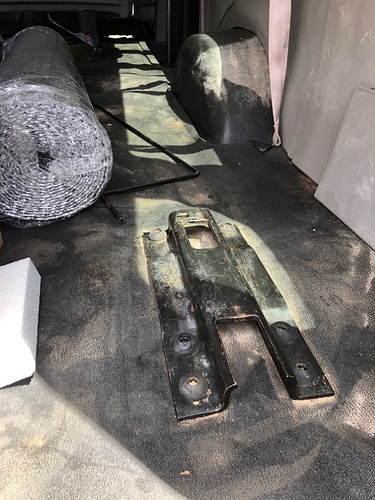 Those are definitely heavy duty… I would check underneath and see what they’re bolted to. I’d also call a dealer and get their opinion from the service department.

I looked underneath and there’s a sandwich of metal/connector from the nut plates to the rear of the body, but the body appears to be fully supported by the frame. The body/frame connection looks very stout. Think I’m going to remove them, but reinstall the bolts that go into the nut plates associated with that sandwich of metal.