Do I buy a used converted van? Or convert my own van?

Hey y’all. I’m dreaming of the days in late summer 2020 when I’ve quite my job and taken to the open roads. Going from the east coast to the northwest, down the Pacific coast and then back east through the sunbelt. Once I return home, I’m considering ideas such as…living out of my van or renting my van.

Any advice and/or opinions on whether I should buy used converted or used cargo and convert is very welcomed. I’m trying to get started…I just don’t know where to start!

The depth of your wallet is the guide, can you afford the “one” you want? Heck, can you find the “one” want?
DIY can cost less up front right now because you do what you can when you have the money. I hit the road in an 87 Ford van with a camp chair, folding TV table, an air mattress from Walmart and some tools. I build a bed frame from 2x4s and got the plywood sheet to top it with cut to what I needed at HomeDepot and screwed it on in the HD parking lot. Doing it as I went.

IMPORTANT! Will the country be open enough for you to do what you want in your time frame? Keep this in mind as you head down this road…

Thanks for the feedback @becida!

As a potential newbie with no experience in living on the road, it is hard to know what I “need” to keep me satisfied and moving forward on the road. I see the mid-to-high end vans and think, yep, that’s like my brick and mortar home but with wheels. Let’s do it! But then the price tag says you don’t have this much money to your name so I ask myself, can I get a loan? It seems as if financing a converted van is near impossible. I thought my 2020 dream had reached its end. But I’ve found new solace and possibility in being more realistic about what I need for a few months exploring the country. And what I can afford. So somewhere between an Instagram influenced pipe dream and a bare minimum setup such as yours seems to be my moving target right now.

Debt is a killer and with the way the world is today it could get even worse than that. It’s a poor time to be a nomad compared to 6 months ago.

Vandwelling can be done on a budget, there are no rules but starting with debt is not a good thing. This might be different if you have a good job in an urban area and you’re looking for something beside rent.

Have you seen the forum at cheaprvliving.com? Some good people and experiences there.

I disagree with this, I think it is a great time to be a nomad. Social distancing is much easier. Most campgrounds are both empty and free at this point. Gas is as cheap as I have seen it in 20 years. Many companies are realizing working remotely is both doable and necessary moving forward with the “new normal”. In the process creating a better work / life balance for a lot of employees and reducing their own foot print. If you’re paying for rent every month, you can certainly afford not to have rent or afford a payment which is likely cheaper than most rent. We’ve gone through pretty much every option, VW, 80’s conversion and settled on a Euro style van. that is what was best for us and customizing it keeps us busy. When you start off, you’ll realize you don’t need much and likely much less than you originally thought. As far as buying something already done or customizing it yourself that really comes down to budget and your ability to do it yourself. Also consider how much you really will travel. We’ve done about 17k miles in the last 7 months. If that is the case you will won’t something very reliable.

We took the exact same trip you are planning, South Carolina to Washington then down 101 and 1, through slab city and Joshua tree. Up to the grand canyon and back to Charleston. As of now we are doing it again albeit a bit different of a route this time.

My best advice I can give to anyone considering it is to jump in and go. You need a place to lay your head, food to eat and money for gas. It is as simple as that. Don’t wait, what’s the point? It won’t be perfect no matter how much you plan. The going, the learning and the doing are some of the best parts. We don’t regret a single second of it and I highly doubt that you will either. Good luck!

Any advice and/or opinions on whether I should buy used converted or used cargo and convert is very welcomed. I’m trying to get started…I just don’t know where to start!

A) Never buy a non factory camper. If they were good, they wouldn’t be for sale.

B) Used FACTORY campers can be financed.

C) You can buy older, but in excellent shape factory campers cheap, MUCH CHEAPER than most people can build their own. Class C’s are frequently cheaper than Class B’s, so I would consider those as well.

D) Don’t modify a factory camper, their value is in their original condition. (Curtains & cushion covers can be updated without hurting the value.)

I don’t like loans, I have bought many very nice factory camper vans and motorhomes for under $2500.

Debt is a killer and with the way the world is today it could get even worse than that. It’s a poor time to be a nomad compared to 6 months ago.

Other than social distancing, and grocery store shortages, my nomadic lifestyle has not been terribly affected.

@becida yea I’ve been fortunate to avoid debt to this point in my life. Just before putting my mind on van dwelling, I was getting preapproved for home mortgages! The economic instability of world right now definitely raises cause for concern and could make one decide to play it safe…OR…throw caution to the wind as @Bretly describes!

@Bretly There’s definitely two sides to the coin and, obviously, I’ve been seeing your side lately! I will say that the current times have already made camping difficult as I have tried for weeks to rent a van and spend a week in the NC mountains but the public campgrounds keep pushing their open dates back further and further.

I think you’re right about finding out I’ll need less than I think. Just based on my international traveling experiences, I almost always over pack. I can see this being the case for van dwelling too.

From Charleston?! Me too! That’s oddly comforting to know someone has done/is doing something very similar to what I’m considering…and speaking positively of the experience. I think my heart is sold on the idea. Now I’m just trying break that impossible seal and decide on what I should purchase/loan!

Hey hey!! Get out there and DO IT!! Live your life. There will always be trials. Just completed the trip, for the most part, that you describe. Right in the middle of the whole BS scare that’s going on. Get. Out. There. And. Live. Your. Life!!

@ssmorgan681 hey that’s awesome! Thanks for encouragement. To be continued…

Staying with what you can afford is always a wise idea.

Most factory campers will have an RVIA badge or sticker on them. 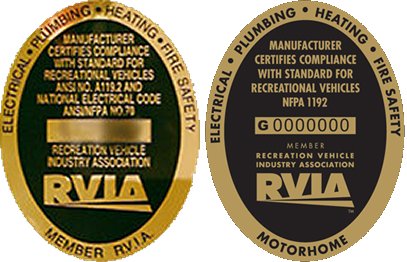 I have seen forgeries though. Basically if it’s a cargo van, it IS NOT a factory camper. Generally a factory camper will have many opening windows, a 3-way fridge, and a legitimate furnace with a thermostat, and usually a shore power hookup. Not all factory campers come with a bathroom, but I highly recommend them.

Practically no factory campers come with solar, and it is best avoided. Factory campers are made to strict safety standards, but there is no safety or quality control on DIY ones. I also try to avoid any that the owner has made modifications to, because once again you’re rolling the dice aas to the quality of those modifications. Many DIY campers or mods have been known to blow up or burn to the ground.

When it comes time to resell it, any owner mods severely hurt the resale value. Generally speaking, DIY campers are worth only what the van itself is worth, and any money put into converting it will be lost. I lost just over $30k within a year on one I built, and it was actually higher quality than factory campers, but it was a cargo van, and campers want windows.

With much experience (Real life experience, not Youtube/Instagram type experience!), it is possible to build a very comfortable camper van on a budget. My current van was originally a Travco camper van, but people online convinced the owner to strip it and start over. After stripping their $10k+ beautiful camper van they realized it was a horrible mistake and they were in over their heads. I bought it stripped for $700 and spent ~$300ish converting it back into a simple camper. I did it quick and cheap, planning on making it nicer later. Now, 11 years later, I am still living happily and comfortably in my original quick and cheap no-build “build”. My $700, 1973 Dodge camper van is now approaching 500k trouble free miles on it’s original engine & transmission, with nothing more than typical maintenance ever needed.

Update: I’ve found a used early 2000s Ford e250 low top conversion. It has less than 200k miles. It’s in my price range. It seems to be “the one” but as I’m reading through the specs of the van itself as well as the conversion additions, I’m not super confident in what I should be looking for…does anyone have any experience with early 2000s Ford cargo vans? What are the bottom lines when it comes to things like solar panels, batteries, fridges, water tanks/pumps, fans, AC/heating, and any other red flags I should be looking for in an option like this?

A) Is it a factory camper? (Most important first step)

B) Does everything work? (Test it yourself, or have it demonstrated to you.)

C) Has it been owner modified? (If yes, run away!)

Example, that rig would NOT have came with solar, even if it is a factory camper. Owner modified = BAD NEWS!!!

Hello. Its owner modified. I will certainly take into consideration your warnings! Thanks.