Best Van for the job

I just stumbled across the van conversions on pinterest… Hoping you all can give me some advice. I’m not necessarily looking for a van to travel the world with

but work out of. sounds easy right… here’s the issue. Currently I have a truck that I pack all my weekly event stuff in but then I have to also once at event set up a table my work station etc. Its a lot and if I need to leave my station to deal with an issue I have to carry my computer bag with. An RV is just too big, I was considering a cargo van for all the goodies thus this wild world of van conversions popped up and now im in love! It seems perfect.

Here’s what im looking for:
-Space for equipment like trash cans, extension cords
-work table
-sink
-small cooking are would be awesome
-bed (im often at these events for 12+ hours)

How realistic is this. Is this super expensive and what type of van would you recommend. Luckily the man in my life is a welder and very handy. And no it doesn’t have to look like this photo but lets be real this would be AWESOME! lol 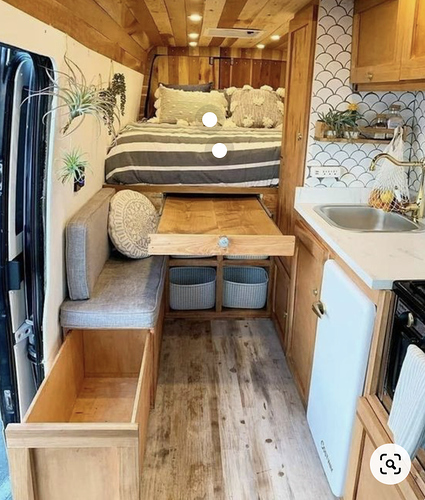 I would strongly suggest a cheap older class B camper van for you. It will save you money up front, retain a higher resale value, will be better quality than 99.9% of any of the DIY builds, and be move in ready.

The promoters who suggest cargo vans and DIY are doing it for their own benefit, not yours. They don’t care about your comfort or convenience, they make their money by conning people into making poor choices and expensive purchases.

Living in a box without windows is pure torture for most people, regardless of how nice their interior is. I got conned into trying it, and it was the most miserable year of my life, and I lost over $30k in the process. Other than that expensive nightmare, I have never paid more than $2500 for a camper van or motorhome, and all of them were 10,000% better than that cargo van, even though it’s interior was far superior than most factory built ones. The problem was it was dark, cramped, claustrophobic, depressing, and inconvenient. It was also a money pit, and the promoter’s solutions were to continually throw more money at it.

Don’t believe the BS that cargo vans are stealthy either, they are the exact opposite. The public considers unmarked cargo vans to be creepy, and they are huge targets for thieves hoping there are expensive tools inside.

20-21 foot small motorhomes can still be parked in normal parking spaces too. I had a very nice 18 footer at one point in time, and it was actually much easier to drive than the cargo van was, and much more comfortable too.

Height can be a very important factor for many people too. If it’s tall enough to stand up inside, it’s too tall for most parking garages and drive-thru’s. I had a number of low top camper vans, and I really miss the ability to utilize parking garages and drive-thru’s. Strangely enough, I never missed the ability to stand up inside. The only compromise was showering while seated, and now, even though I have a high top, I still prefer showering while seated.

Good luck & keep us posted, we’re here to answer any questions too!

Thank you so much for you input! I will definitely check out a class B van. I think you make a lot of sense! And yes, ill keep you posted!

@verajune there are a lot of factors to consider in your question (i.e. climate of the region you work in, need for electric power when on-site, how much storage space you need, how much do you have to spend, how handy are you at building things). That picture you posted is amazing but it was probably built with some really good carpentry skills. Do you have carpentry skills? What about electrical or plumbing skills?

If you are going to in colder climates you need to consider insulating your vehicle and there’s how are you going to heat it. What about toilet & shower facilities? Lots of van lifers buy a gym membership and shower there. Portable toilets are ok but they smell. Composting toilets can eliminate the smell but can be more expensive.

Honestly, it is quicker (a build takes 4x longer than you might think) and often cheaper to just buy what you need if you are wanting to get into a liveable vehicle quickly there are lots of cool RVs out there that have a garage built into them (called Toy Haulers). That would provide you with a large storage and nice living space. They come built and ready to go. Or get an RV and tow a trailer for your stuff.