Been thinking about entering into van life

Hi I’m Chrissy and van life is something my friend and I have been interested in and would ultimately like to do a DIY conversion. We would love to see some actual build outs in person to get a feel if this is something we think we could do but don’t know where to start.
We are in NY, any help is appreciated!
Hope everyone out there is staying safe!

If you discount anything you’ve seen or heard on the internet, was this originally YOUR IDEA? Especially the DIY part?

Every year, thousands of people have their lives ruined and their jobs and bank accounts lost due to the unscrupulous scam artist promoters of van life. It isn’t all rainbows & roses out here, and it’s getting tougher all the time. Nobody should gamble more than they can afford to lose.

There is a very high probability that a DIY project will cost you much more than a used factory camper, and the results will be far worse. Don’t forget the time involved in a DIY project, as well as the money. You can find older, move in ready factory Class C motorhomes for ~$2,500, and Class B factory camper vans for ~$5,000. These are a better choice to get you started, so you can decide if you even like the lifestyle. If it’s not for you, you can get all or at least most of your money back. That isn’t generally true on newer or DIY rigs.

What about jobs? This is another major failure point of people trying out this lifestyle. It’s easy for the promoters to say “It’s easy to pick up jobs whenever needed”. IT’S A LIE!!! If it was true, it wouldn’t be a major failure point, now would it?

With all that said, there are mobile friendly jobs, and skills. The catch is that you need to get these lined up and make sure they’re stable and reliable ahead of time. You don’t want to find yourself 1,000 miles from home, dead broke, and with no job.

In depth planning with multiple back up plans, and a large emergency fund can help you succeed. There is no hurry, the roads will always be there… It’s a beautiful country with lot’s to see and enjoy. Do you have a camping background? Many good people suggest that you rent a camper van to try it out first. If the stars align, like they have for me, it can be a wonderful life, but you have to be willing to accept both the good and the bad.

Vehicles break down, brand new, or very old, it doesn’t matter. When it’s in the shop getting fixed, you’re essentially homeless. You need to be prepared for that. Can you still work while it’s in the shop, and you’re in a motel? Do you have enough money to fix it, pay for your motel, and eat? It could be in the shop for a month or more. My Chevy Express spent over 3 months in the shop! I wound up buying a $1500 motorhome rather than paying thousands a month for a motel. That Chevy cost me over $10k in repairs, even though it was only 2 years old, and it was still a piece of junk after that expense. I lost over $30k in about 1 year on that rig, but it taught me, or in my case actually reinforced my original opinion that the time to start saving money is with your original purchase. Cheap vehicles can be easily replaced if they cost too much to repair, but I had $70k in that Chevy for the van plus the conversion. One year later, I was lucky to get $30k back out of it. One very expensive lesson. With that single exception, I have spent over 40 years living on the road, and enjoying the vast majority of it. Cheap rigs, cheap living, and a reliable income have been very good to me.

Today, I could replace my rig AND everything I own for under $5k easily, plus I have at least 6 months worth of living expense in my emergency fund on top of that. I don’t trust insurance companies to make things right, so my emergency fund is my real insurance policy.

I’m not trying to discourage you, or crush your dreams, but reality can be harsh. By examining the good, the bad, and the ugly, our chances of success are greatly improved. A quote from Maya Angelou is very relevant: “Hope for the best, but be prepared for the worst.”

Well I most definitely appreciate your insight and feedback!
I’m not quite looking to change my entire lifestyle, just to get a van so my daughters and I can go on some adventures. Ultimately when I retire (hopefully in 5-10 years) I would love to go on longer adventures so this will be good practice.
I’m definitely entertaining the used van idea to try out before I fully invest myself in this but the DIY part is a must for sure, it’s a passion of mine to use my hands to build and create so it will be a fun project and I’ve always been good with stretching a dollar so the financial part doesn’t scare me.

And yes I do have a camping background, I’m quite comfortable in the wilderness, nature is in my blood

With a camping background, and a “can do” attitude and determination, you should be in pretty good shape.

I live in Michigan so I won’t be any help to give you hands-on experience, but I can tell you what I did.

I already owned the Van so that was pretty much my investments. The batteries and fridge were already in use when I tent camped out of my jeep.

Thanks I appreciate any and all advice for this one

I got a 1998 GMC passenger van. After removing the TV and VHS player, the middle and back seats, I built a bed frame that will hold exactly to spec ! Several cheap plastic drawers. 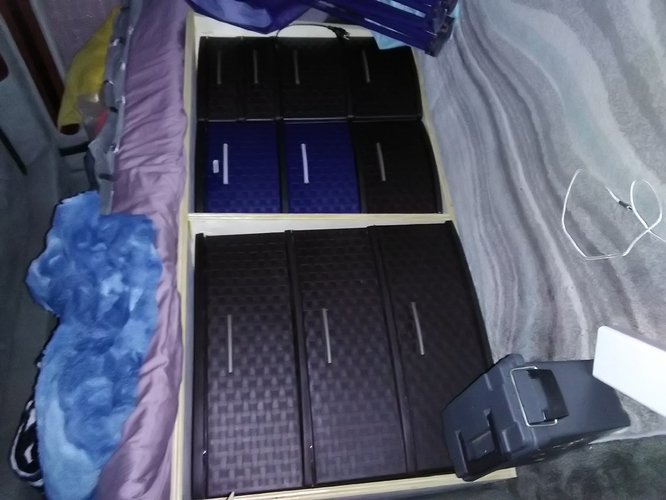 The back mirrors the front with more storage!

So I have three of the wide ones and four of the thinner ones and I have more than enough space for two weeks worth of clothes, pantry food spices and cookware. I have an apocalypse drawer, as well as hobbies books board games toiletries and lots and lots of tools.

My coworkers laugh because if they ever need anything, it’s most likely in my van LOL

I’m a fan of repurposing. I’m a fan of being able to replace something inexpensively. And in a year, none of them have broke.

I use my van for work and deliveries and having the versatility of options to be able to move things around to be able to get everything done I need to do is friggin priceless.