) will be taking it to San Onofre, Cardiff Reef, and Swami’s. I needed a van to be able to secure my surfboards, and rest between sessions. I’ve already pulled the seats out. I’ll be fabricating a bed and cabinets out of 1 1/2 inch square tubing using the original seat floor mounts for there bases 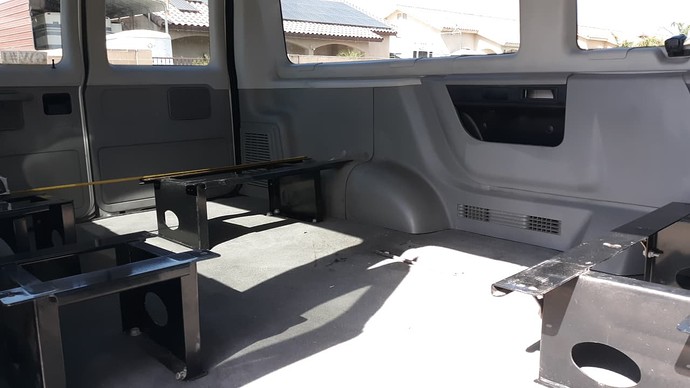 A passenger van is a good way to go because the interior is already done. I also have an E350, 2000 passenger model that I used for a simple conversion. No surf boards, but do carry a canoe on the roof on occasion. They’re good vans.

Did you take the seats out? Put a bed or cabinets in it? A picture would be appreciated

Yeah, took all the back seats out, installed an old futon frame that I raised enough to store stuff underneath, and installed a small locking cabinet, fold out table, and a charcoal/coal-fired heater (has longer burn times with charcoal briquettes or coal - I’ve never used wood). Installed a seat swivel under the passenger seat to open up the interior, and to have another seating option. Threw some indian rugs in to add some color.

Also installed a small solar power system using a 150 watt panel and 110 amp AGM battery. The DC system runs a couple small pop-up fans in the rear part of the roof, some LED lights, USB and 12 volt charging, an AM/FM/Bluetooth radio, and a propane detector. It’s not connected to the van’s starting battery, so the only charge it gets is from solar - so far so good, it meets my needs.

On top I installed a heavy duty set of cargo van ladder racks (600# capacity). The racks support the solar panel, a 6" diameter PVC pipe where I store the 8x10 ft canvas awning, awning mount, and kayak/canoe racks. For the heater the chimney penetrates just forward of the solar panel; while driving I put a plug in, and replace the plug with a chimney extension when using the heater.

Installed a trailer hitch to mount a bicycle rack, motorcycle rack (can carry a dual-sport motorcycle on the back), or tow my trailer with two motorcycles.

Covered the windows with various blinds and covers when parked.

When parked I usually put the awning up and spend a lot of time outside. Unless the weather is lousy I’ll cook and lounge outside where I set up a large propane camp stove/BBQ, tables, and a shower/crapper tent if needed. Use a groover toilet if needed.

I stumbled upon your van while searching the site. It’s very nice. I’m going to look at swivel seats a bit more closely, I’ve been toying with the idea of installing one for the same reason. About half the time, I’ll be towing a travel trailer that has most of the conveniences you mentioned. So, it will not be self contained, or anything close to it. I just want plenty of room to stretch out comfortably to read or sleep while I’m spending the day at the beach. Thank you for taking the time to get back to me, I’ll be watching for your posts. ~m