Am I doing this right?

Introduce Yourself… Hi I’m new to this blog, but need to know if I have 3x 100watt solar pannels with a 40 amp charge controller is this ok for a 700 watt inverter for my off grid building?

You haven’t given enough information.

And it’s far better to use DC appliances instead of AC appliances through an inverter - DC appliances, lights, etc. are much more practical when everything is powered by solar/battery. There are several discussions here about how to design a system. Read through them.

You didn’t mention batteries, and you’ll need those in your system before it’ll work.

Your solar & charge controller are basically a battery charger, and it’s your batteries that actually power everything, including your inverter (which you should avoid if at all possible.).

Your battery bank needs to be sized according to how much power you’ll be using each day, plus an extra buffer (I recommend at least a 50% buffer). 300 watts of solar is enough to charge a 100ah deep cycle battery about half the year, in the winter, it might not be enough. A 100ah battery will only give you 50ah of usable power, or 600 watts total. Needless to say, that’s not very much, and when you divide that by the normal 10 hour discharge rate, you’ve only got 60 usable watts.

Most minimalist off grid cabins have about 10 times more than you’re proposing, and more importantly, they all have generators. If money’s tight, start with a generator, it will be cheaper, and you can add solar later. You’ll need the generator anyway, and you can run it even without a battery bank.

A friend spent over $10k for a solar system & batteries for his off grid cabin, and it was a miserable and costly failure. His generator provided his only reliable power source. I too have given up on solar. My off grid cabin is on wheels, so I charge my battery while driving, and have a generator for a backup. Much cheaper and more reliable than solar.

A different friend uses a WW2 solar/multi-fuel stirling engine generator to charge a large battery bank. If there’s sunshine it will run for free, and if not, it will run on fuel. I’ve seen them for sale at surplus stores, and also from private sellers, but they’re getting rare because their owners tend to keep them and not sell them. Unlike most generators, the stirling engines are almost totally silent, an added bonus.

"It is always cheaper and easier to conserve power than it is to make it." ~ Road Warrior

Panels listed a 100 watts can, in fact, produce more than 100 watts. That measurement is at a specific temperature/conditions that the industry has adopted to keep measurements between panels consistent. As the temps drop down from that standard that the wattage goes up, usually 5-10%.

FWIW you can run things directly from the charge controller as well. I’m not sure what it would be and I’ve never hooked mine up this way. I suppose so you can charge your batteries and run your items at the same time without the battery being in a constant state of charge and discharge.

Solar has easily been one of the best investments we have made. I do agree with @Van_Dweller for the need to have a generator especially if you’ll be full time. We just use ours considerably less than we needed to before. Which in and of itself is concerning as it’s bad to leave any engine sit.

I am really confused on the OP’s question though. Are you building an off grid home or building a van while off the grid?

It can be done with solar alone as long as you’re realistic in terms of power usage. I run a 150 watt panel, 20 amp charge controller, with a 110 amp AGM battery, and never run out of power. But - the most I use in one day is about 15 or so amps. Since a 110 amp AGM battery is really a 50 amp battery I have 2 to 3 days of reserve even if it’s cloudy (and even when cloudy or parked in the shade the panel provides a little bit of charge).

Our power usage is minimal - LED lights, two small fans if it’s hot (no fans if it’s cold), device charging (usually only our cell phones), and an AM/FM/Bluetooth radio. All of this runs on 12 volts DC; we rarely use an inverter.

Heating in our van doesn’t use any electricity (solid fuel heater similar to a wood stove), we use an ice chest for refrigeration, and our lifestyle does not require energy-intensive electronic entertainment. All of our cooking is powered by propane, butane, charcoal, or coal. Books don’t require electricity - only some light from an extremely efficient LED. Most households until the 1930s and 1940s didn’t have electricity - do what they did!

Ren, 100 watt panels may provide a little more than 100 watts, but that’s only if they’re pointed directly at the sun and new, which is rare on a van - most practical on a van is a horizontal, which, especially in winter with the sun low on the horizon, isn’t very efficient. Days are shorter in winter, more cloudy, and there may be frost or snow on the panels. In practical terms it’s good to add 30 to 50% to the calculated draw.

Well sure but I thought he was talking about a building, not a van. Mounting panels on top of a van is about the worst place to put them

I keep mine on a portable mount that I can position for optimal angle throughout the day.

Ren, the solar panels on our house are rarely pointed exactly correct either. They’re on the sloped roof, same angle as the roof, pointing roughly south.

I’m willing to bet that, unless you go out to reposition yours every 10 minutes and measure the exact angle for the time of year based on the Earth’s tilt and your current latitude, that yours aren’t either. Let’s be real.

Here’s a screenshot of our house solar output for today. As you can see, the power produced varies a lot due to cloudiness and time of day. When it’s cloudy it still produces power, but only at about a half of a sunny day. On a sunny day it’s a perfect bell curve. The day isn’t over yet - that’s why it doesn’t taper off toward the right. 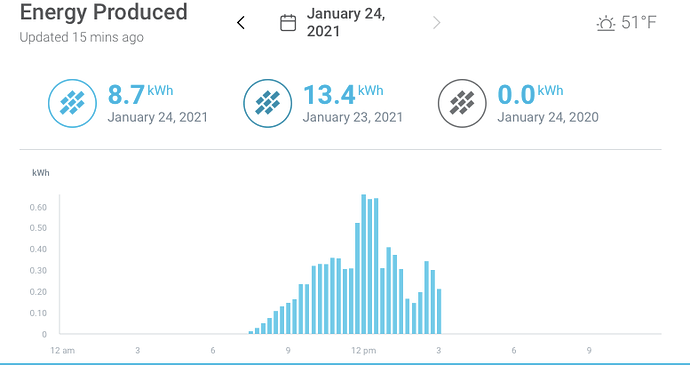