Always have a plan for breakdowns

Blew a spark plug this afternoon. I carry a kit to fix this very problem (common on this era Triton engine), so just need to find a mechanic who can do the repair - any competent mechanic should be able to do it. 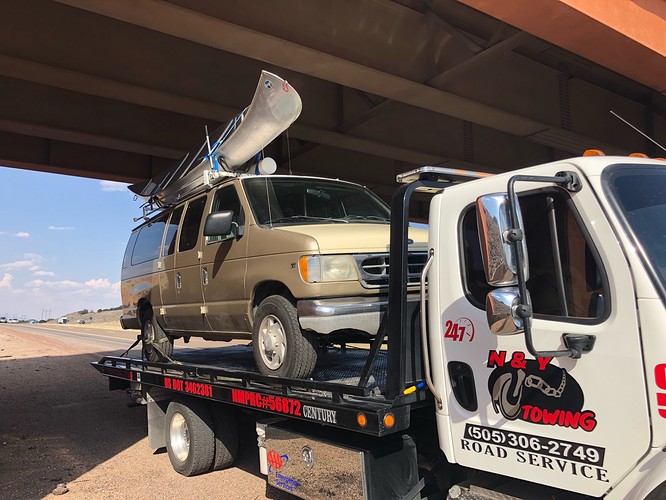 Not sure what kit you got, but we’ve always just screwed the helicoil onto the spark plug, reinserted it, and done.

If yours requires a mechanic, I would check for the DIY version.

"If you prepare for the worst, every thing else is easier." ~ Off Grid

I have a Cal-Van kit. Much better than a helicoil because it addresses the root problem of why they pop out. They pop out because Ford machined a tapered hole in the head that can only accept 4 or 5 threads toward the bottom. With the Cal-Van kit you ream the hole bigger and tap it larger to give a solid steel insert more to bite into. The plug threads into the insert.

Going to have the mechanic do all 8 of them, so it will never come up again.

I guess the newer versions of the helicoils have a pop out flange that expands when you insert the spark plug.

"The only place where health, wealth, money, success,
or happiness comes before work is in the dictionary."
~ Rubber Tramp

Nothing pops out, and it’s not anything like a helical.

The van is back up and running; almost ready for a 4,000-mile trip we’re embarking on soon. Change the oil and check the tires and she’ll be ready to go.

The cost to install inserts in all 8 cylinders, one new coil (each plug has its own coil - the plug that blew out destroyed its coil), and 8 new spark plugs including tax, was $985.

Sure makes me glad I have an old, simple, reliable, non electronic BS engine. I did put a magnetic points eliminator kit in mine 300k miles ago, added backup electric fuel & water pumps, and backup electric fans for the radiator & transmission cooler, but other than that the engine & transmission are all original and quickly approaching 500k trouble free miles. I did add extra gauges too, so I could keep better track of what’s going on. Idiot lights aren’t a bad thing, but actual gauges are much better. All my gauges have both beepers & idiot lights too, to alert me that they need to be checked.

IF the fix is permanent, and you put enough miles on it, it may be a good investment.

I feel like my ~$200 in backup plans, and gauges were a good investment, even though I’ve never needed either of the backup pumps, and only used the backup fans a few times in heavy, more stop than go traffic, combined with extremely hot weather. I try to avoid those situations whenever possible, but it doesn’t always work out that way. Got stuck in a 5+ hour stand still traffic while crossing the desert once, but I was lucky, and was able to pull off the road & park, and my swamp cooler kept me comfy until all the traffic was gone. I had internet, so I just worked while waiting, and watching the circus of cars overheating, running out of gas, etc. Great day for tow trucks though…

"Fuel powered everything for the win, preferably hydrogen." ~ JustTheFacts

The good thing about newer cars is that they tend to be more reliable - to a point - after about 20 years good luck getting parts unless it was made in the millions like my Econoline van; I can see parts still being available when it’s 40 years old. Another good thing about newer cars is that they’re usually equipped with a much better cooling system than the old stuff - designed to handle the most extreme conditions even with the AC going full blast in stop & go traffic. Newer cars also have most of the pollution control stuff integrated into the design. The older junk was a bunch of bandaid compliance stuff added on that caused a lot of problems in the 70s and 80s.

Van Dweller, you mentioned swamp coolers - just rebuilt mine. Was built into a 5 gallon plastic bucket, but now it’s built into a steel surplus 20mm ammo can. Much thicker pads - combination of aspen and a MasterCool pad. Better form-factor for the van. Cools the air almost 20 degrees. Works great here in the desert southwest, but I also made it so it can be used (in a pinch) in high humidity by stuffing it full of ice instead of water and leaving the water pump off (fan blows the air through the ice).

My personal experience with newer cars, and everybody I know, has been terrible at best ever since they have become computerized, but that is only part of the problem. The larger problem is that the car makers are putting profit over quality. Many of the newer cars need major & expensive repairs before they even hit 50k miles. There’s a larger story behind this if you’re interested.

My 1973 Dodge 1-ton Maxi-Van, with the 318 engine & 727 7ransmission is approaching 500k trouble free miles on the original engine & transmission, and any part needed is still readily available, possibly because they made essentially the same van for 20+ years. Starting in 1993 the design & quality took a huge nose dive. Their mini vans took a similar hit starting in 1991. The 1984-1990 models were far better quality and reliability & fuel economy were much higher.

Swamp coolers come in multiple types and configurations. Here in the USA, when I was a child, there were “Swamp Coolers” that worked in high humidity areas, and “Evaporative Coolers” for drier areas. When “Air Conditioners” came out, they quit making swamp coolers and greatly reduced the production of evaporative coolers to push the air conditioners because there was more money in sales & repairs of air conditioners than there was in the super reliable and long life air coolers. Never mind that the air coolers cooled better, and at a fraction of the cost.

Both types of air coolers use water & evaporation for their cooling process. Evap coolers work similarly to a misting fan, just not as damp, but their design purposely added moisture to the air for the dry climates that benefited from it. Swamp coolers used a radiator for the heat exchanger, and actually dehumidified the area where used. This is the type I have been using for many years up until this year, and they work perfectly even in extremely humid areas.

This year, on my way back to S. Florida for the summer, after wintering in N. Minnesota, I was asked to test and help troubleshoot a new prototype cooler that requires no electricity. It is powered by a liquid candle, and uses a series of peltier chips to produce the power for the fan, and both the heating & cooling. So far I must say that I am pretty impressed. It is slow like an A/C instead of fast like a swamp cooler, but it is doing it’s job pretty well. It appears to work identically to an electrically powered A/C + Heater unit, except without the electricity, and it will run on any type of fuel that works with a wick. The liquid candle is vented out of a cracked window. Unlike a swamp cooler, it is a sealed unit that doesn’t require being refilled with water.

With this new, totally silent, fuel powered trend, perhaps we can finally cut our dependence on expensive power generation & storage dramatically, while improving our lives. I’ve been in S. Florida for over a month now, have more amenities than ever, including a fridge/freezer, air cooler, cooking, fans, lights, and even charging my laptop, phone, USB power banks, and other goodies using only liquid candle power. I’m powering everything with cooking oil, not using my house battery power at all, and haven’t even used a full gallon yet. That gallon of cooking oil cost just under $4.50 at Walmart. Several of my liquid candle powered items including my heater/cooler have USB charging ports on them to charge my other items. So far I am really impressed, and the possibilities totally intrigue me. If things go the way I’m hoping, I’ll be able to totally eliminate my need for a house battery, while actually adding extra amenities. My used 3-way fridge/freezer only cost $50, and was simple & easy to convert from needing propane, to liquid candle power, and when using candle power, it requires no electricity at all.

Vegetable oil is just about as green & renewable as it gets too, and it’s even made in America. No fossil fuels, or pollution from battery manufacturing, or toxic waste from dead batteries. America grew wealthy & successful through intelligence & quality, now we’re failing because of stupidity & greed. It’s time to turn the tide and get back to what actually works, intelligence, quality, & made in America.

"Fuel powered everything for the win, preferably hydrogen." ~ JustTheFacts