I was considering a Separett waterless tiolet but because of the price tag and what it actually is I’m reconsidering. At the end of the day its just a device that separates urine and feces into two separate locations. Urine to a black water tank and feces to a bag. I feel I can achieve this with just the Separett diverting seat and making my own box that holds a bag I can remove. The Separett diverting seat is roughly $150 compared to $700 for the complete unit. Has anyone tried this method described?

Plus you could probably create your own urine diverter to attach to a regular toilet seat from dollar store materials!

Your craftsman skills will determine that. There is nothing difficult about the set up. Electrical for the pump, pex tubing, shower stall, RV toilet with seat and holding tank or tanks.
With that said I wounder if you would even save money doing it yourself.

Your writing is impressive. You can see more products at kimquoctien .com
Thank you very much

Moderator Note: This post might be spam, but the website is not in english. If somebody could help me decide, and reply to this, I would appreciate it. I don’t want to delete it if it’s legit. THANK YOU!

We are still stuck figuring out what to do. Originally our van had a toilet https://www.thetford.com/product/electra-magic-model-80-rv/ but with no holding tank and 3 gallons of waste adds up quick so pumping out every couple days (no holding tank) would have been a headache.

Next we tried to DIY composting toilet and bought all the parts off etsy (https://www.etsy.com/listing/594071782/diy-composting-toilet-urine-diverter-and?ga_order=most_relevant&ga_search_type=all&ga_view_type=gallery&ga_search_query=compost+toilet&ref=sr_gallery-1-9&bes=1). This was pretty easy to put together and setup and for what it’s worth, the parts were made well and worked well. We had a few problems with this. 1.) it was in our shower so it was hard to keep water out of it while sitting on it closed. 2.) With the diverter my wife for some reason could never hit the correct spot so she basically peed in the bucket anyway. That led to a lot of smells. I still look at the natures head toilet and wonder if it would work. I can’t fathom dropping $1k on it if it doesn’t work.

Right now we just find places to go to the bathroom, which is actually not that hard at all or if at night just take a pee behind a tree in the bushes. We are still contemplating what to do next for this, but we are leaning towards a standard toilet and putting a holding tank on. Pumping out is gross but we haven’t found any options so far that have not been gross. 1bag per poo then tossing it might be the way to go.

When we were sailors we had a thetford portable toilet with a 5 gallon waste tank. This was the worst of them all. Do not go this route. Hauling around 5 gallons of poo and pee to dump from one of those is terrible and they smell awfully bad after about a day.

First of all, you should keep in mind, camper toilets would have some pros and cons because these are not your fast flushing home toilets like this. However, here, I am sharing the best options with you.

Natures Head Composting Toilet - Though it is an expensive toilet but could be a great option for eco loving campers. See its image below: 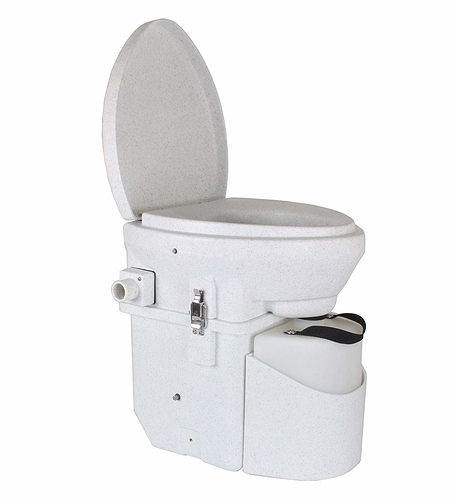 Dometic 970 - I personally like it because it is quite easy to use and give you a luxury camper life feel. 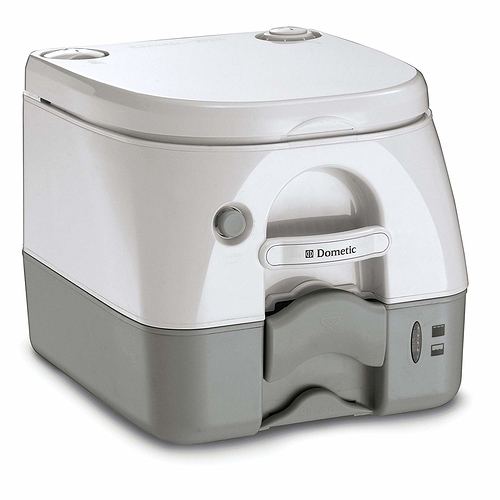 You can see more options here.

I’m pretty shocked to hear how many people are bagging and throwing away their poop. I don’t care how convenient and cheap it is compared to other options, that sounds like something a crazy person would do. If you could ask someone 100 years ago what they thought about that you’d get thrown in an asylum. I still can’t believe we bag and throw away our pet poop and will get scoffed at for not doing so. I’m planning a flush toilet with holding tank for my build. Emptying a black tank is by far the least weird and awkward sounding option to me. Plus it gives me the peace of mind knowing my waste will go through proper treatment.

Incinerating toilet is probably the nicest to dispose of afterwards but they don’t come cheap, if compared to a bucket.

Yeah hearing the number of people who dumpster their waste is surprising,

But a 100 years ago? The were still using chamber pots and outhouses.

In cities people would throw their waste out the window onto the street, second floor, even.